Each Thursday we are sharing our Just Trust Stories, real life stories of times we stepped out in trust. Today, Richard Provencher tells of a specific time he had to fully rely on God.

Today is also Day 2 in our Trust Without Borders experience. Scroll to the bottom of this post for today’s trust journey. 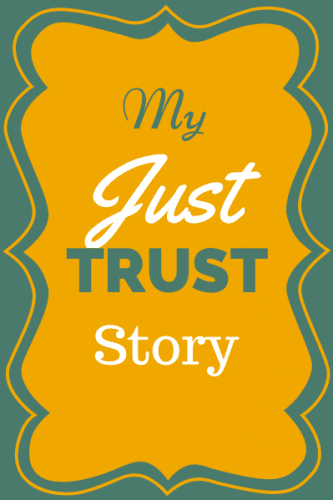 It was then I came face to face with death while at the Nova Scotia Provincial Exhibition in Bible Hill, Nova Scotia.

A variety of lights flashed from the Ferris wheel. Sounds of merriment and machinery penetrated the sky.

I felt noise and confusion enter the right side of my head, as I stood amidst the crowd. An overwhelming sound as if some out of control twister filled every crevice in my brain. It threatened to explode my head from my shoulders.

I had visions of a large physical wound, with my head missing. Grabbing the top of my skull with both hands, I kept saying, “Turn the music off. Turn the sound down.” Then I began to slowly spiral downwards, leaning to my right.

I still remember sitting briefly, feeling nauseous. I tried to use my right arm to hold me up but it had no strength. I slid to the ground and lay on my back. I was talking gibberish, then could not move my lips or any other part of my body. I was comatose, yet nearby someone kept saying, “Don’t get up, stay down.”

I was not even aware I lay on the ground in the center of a gathering crowd. I could hear voices coming from different directions. “I’ll phone your wife,” I remember my friend Charles saying from a distance. I heard someone else say, “Some old geezer kicked the bucket.”

At the time I was completely still and thought what a rude remark to say about someone, not realizing the comment was directed at me.

Then I heard an ambulance siren for a long time, which unknown to me, was heading full speed to Colchester hospital. I could not comprehend it was I in the vehicle.

“Sounds awfully close by,” I remember thinking. Only when we entered the hospital was I able to move at all. Apparently I had been comatose for about 45 minutes.

I also found out later something quite significant had occurred at the precise moment the stroke attacked my body. Esther my wife had an urging to pray for me at exactly 9 pm at Tuesday night Bible Study group.

I believe those prayers prevented more serious stroke damage during the approximate ten seconds that I slowly descended in a circle until I lay gently on the ground.

Many persons I spoke with during later months said when they had a stroke, they immediately fell down within a few seconds.

I also had three lumbar probes, all very painful. The first two had a hard time getting through the muscle, but eventually a proper analysis was completed. At 11:30 PM a neurologist said they were sending me by ambulance to Halifax, since it appeared I had a mild stroke, due to what he believes was a leaking aneurysm.

I remember asking at the time, “Is that serious?”

While waiting in the ambulance, in a strapped down position, I prayed, “Dear Lord, I am too young to die. There is still so much I wish to do. And un-forgiveness in my heart needs to be dealt with. Please allow me to return home to my wife today.”

After an emergency fifty mile trip to Halifax, two neurosurgeons probed, poked, scratched feet, checked eyes, felt muscle strength, and took a cat scan. They could not find anything life threatening. Said to come back in a week for an ultra-sound on neck carotid veins.

“Go home,” they said. “Something happened. It must have sealed itself.” I am sure they were scratching their heads!

As of today, I continue to be treated monthly and am now 90% recovered. Thank you, Jesus, my Healer!

Richard and his wife, Esther, are thankful to be “born-again.” Both of them enjoy  writing as a Christian outreach. They live in Truro, Nova Scotia, Canada. They would like to encourage you today to pray for one another. 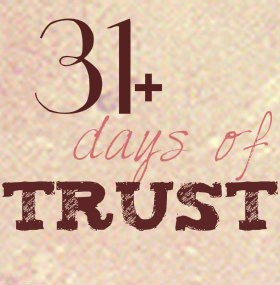 2. The Devo: Read Day Two in Trust Without Borders.  Can you relate with William and Steve? In your journal, jot down any key thoughts that jump out from today’s story.

3. The Plunge:  Trust begins with having a right view of God. Take a few minutes to identify things in your life that have skewed your perspective. Have hardship, trauma, pain, or disillusionment caused you to stop believing God? What about cultural voices, norms, or religious traditions? List those things and then, at the start of this journey, take them before the Lord in prayer. Spend however long you need to with Him in order to place them in His hands. Then ask Him to replace your doubt with faith. Commit the next 38 days of this journey to Him.